Everyone knows about Hollywood, the prolific source of box-office blockbusters. Now, if you are located on the other side of the world, say India, Bollywood, the alias for Hindi cinema, is for sure a reference for the same reason: great movie makers! Dan Fellman, former president of Warner Brothers Pictures domestic distribution, said once: “The international market is a growing and very vibrant place, so when we make movies, we view it as a global opportunity.”

All of us remind of memorable films which inspired, amazed, or moved us along the years. And think of the fact that every week more titles are coming up supported by the fame of actors, actresses, and directors. But, have you ever considered about all the people, time, effort and money behind cameras? Yes, how do moviemakers increase their odds of success? Maybe the answer relays in understanding a few basics about how films are made.

How Movies Are Made
–Script: The making of a movie begins with a story idea. A writer puts the story into script form, also called the screenplay. The shooting script contains the dialogue of the film as well as a brief description of the action that will take place. It also guides technical details, such as camera direction and transitions between scenes. All this, of course, demands a lot of imagination and brainstorm exercise from the writer or team of writers.
–Storyboarding: A storyboard is a series of sketches depicting various sequences of the film, particularly those that involve action. The cinematographer needs something like a blueprint for the next shooting, so the storyboard work saves much time during filming.
–Costume: every good movie needs costumes that meet the environment of the story. In the case of history movies, this involves making sure everybody is wearing pieces of cloth from the depicted moment.
–Makeup: we do not mean just applying lipstick and powder on an actress’ face. The person or team in charge of this critical task have to take into account where the film takes place, the kind of lighting used, the appearance the character should show in front of the camera, and many other factors for having a successful shooting.
–Filming On Location: Will travel be required? How will interior sets be built and designed? The frame where the shoot will take place is a demanding task requiring the best creativity from the team in charge.
–Music Recording: There is no movie if there is no music. The recording of music as a background of a determined scene will influence the viewer feel and therefore, complement the director’s intention.
–Editing: as part of the postproduction process, film footage is edited to form a cohesive motion picture. First, the audio track is synchronized with the film. Then, the editor assembles the raw footage into a preliminary version of the film, called a rough cut. 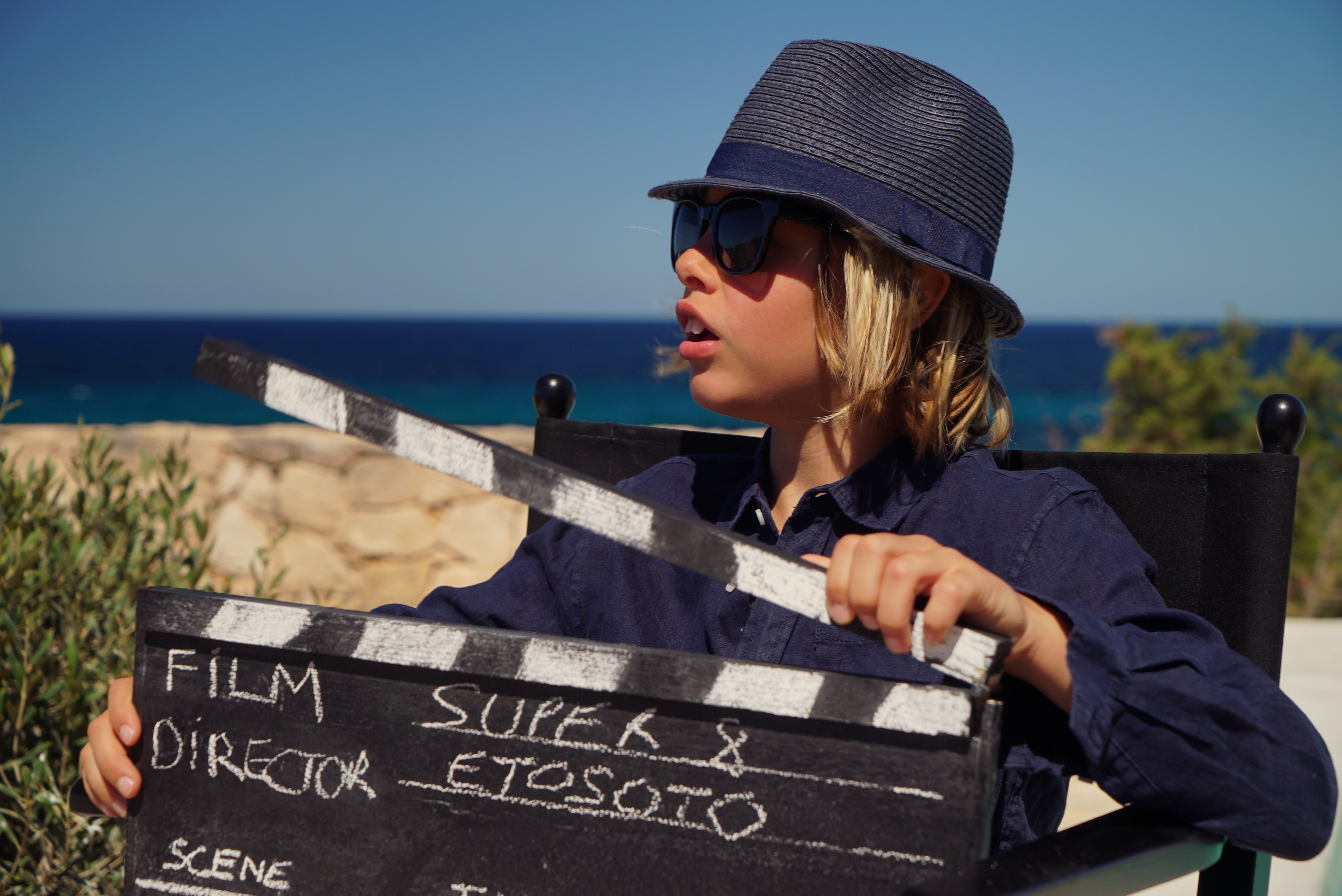 Now, can you imagine your children experiencing all these aspects while having fun? Well, we are happy to show you the opportunity for them of learning all this at our Super 8 Club workshop in Formentera. At Etosoto one of our primary goals is helping youngsters exploring their artistic and cultural interests from an early age.
All these creative lessons are taught by genuinely committed teachers like Gari Kikoïne, who, during a week, will help your children find themselves in the midst of a beautiful team-work creative labor. But we count on many other experiences you can discover at Etosoto.

Check our videos, enjoy our facilities and get related to our creative and innovative vision!